skip to main | skip to sidebar

This past week, I (it was supposed to be me and a boy, like it was last year but...) was in Colorado - in the house I grew up - for Christmas. My computer refused to run the internet, so I couldn't update from "home"; I'll do just a brief overview of my holiday trip now that I'm back here in Seattle: 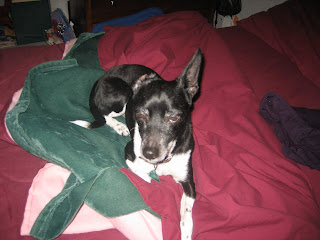 Every year (it's been three since I moved out of state), it gets weirder. For example, I now how only one living grandparent left - and she's the cutest thing ever! And, the crazy dog I've known for the last ten years is mellowing out - my sister says it's because he's now "geriatric." Also, my 'little' brother is now bigger than me. My dad warned my sister and I to "be nice to him because one day he will be bigger than you" - but he didn't say anything about being picked up and carried around the cousins' house on Christmas Eve...:-P

Anyway, it snowed the first couple days I was there, but I did get to see the sun! My siblings and I went swimming - I had a REALLY hard time breathing (altitude much?) - and I played racquetball with my brother and my dad. I went to the museum with my out-of-state cousins (whom I grew up seeing about once a year). I had breakfast with my mom and Nana (each of us are the oldest kid in our respective families!), which Nana was VERY excited about! The family traditions, for the most part, fell by the wayside this year, which was a bit disappointing for me, but I got to spend a lot of time with my family! I also got more Christmas presents (as stocking "stuffers") - than expected - including the COOLEST new "pajama" (I'm going to wear them everywhere, though, just to brighten up soggy Seattle!) pants! (Oh, and my mom MADE that stocking...a really long time ago!) 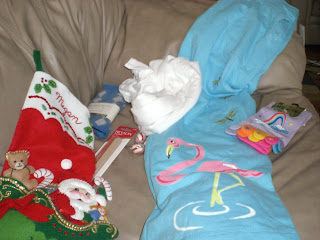 Our family and one of my mom's sister's family got Nana a cell phone for Christmas, too, and one one of my cousins gave each of us (there are seven "snowflakes" [grandkids - my grandparents' last name is Snow] total) money folded in really cool ways - like a ring, a "cootie catcher" (remember those?), a shoe and a bow tie! We played charades until midnight at my in-state cousins' house on Christmas Eve, and Scattergories until about 10:30 Christmas night (both family traditions!).
Wow. Christmas 2009 is over. That means it's almost been a DECADE since Y2K (though now they're saying the world is going to end in 2012) and that, by the end of next year, over half the snowflakes will be of legal age. It also means that I'll be graduating from college and I'll almost be a quarter of a century old!
Happy New Year!
Posted by Megan at 2:55 PM No comments: 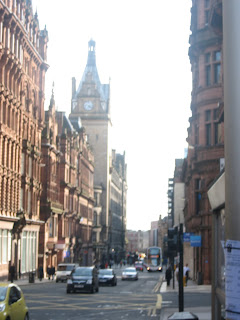 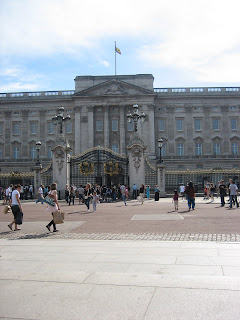 eat, but didn't realize it until I attempted to share pictures and stories (something ) thought I really wanted to do with friends). Part of the reason for this difficulty might just be that this summer was actually a really painful experience for many reasons (spiritual, emotional, etc.); it could also just be the nature of this summer's trip: by myself for most of it, and a lot of God digging around and poking and surgerizing me. I could also not like traveling as much as I thought I did because I'm not running anymore; I missed my church and friends here TERRIBLY. Apparently, there's still a lot to process about last summer... 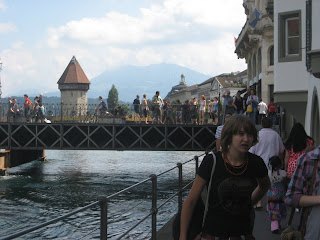 "Dubya so screwed up the economy that the only person making any money is a Native American poet." - Sherman Alexie 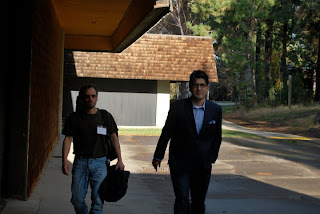 xie asked me if I really thought my life was that ordinary. He barked out curses against technology and it's community-cracking habits. He made fun of conversations people have just after landing in an airplane to their home destination. He swore a lot. Sherman Alexie is sort of an asshole that uses sex to get people's attention; I love him because when he's got it, he asks us why we blame the elementary school teachers (my mom is one and I believe she has one of the hardest jobs you could ever have...she's Special Ed) and "poor white" (he's Coeur D'Alene Native American) for the collapse of the economy. He tells us that what we have for breakfast is amazing. He tells us how to give good gifts to each other, explains the romance behind mixed-tapes (no, it's not their antique quality, it's the hard word and time that has to go into making one if it's going to be good).
He made me think about how I didn't miss my cell phone when I was in Europe: "I watch you guys kill yourselves every day with these things. Why not, when you land on that plane, have an extraordinary conversation?" He tapped into my horror at how fast time is going: "I know I'm hard-wired as an Indian and a Catholic to mourn, but I'm growing increasingly nostalgic and I'm 43! Apparently 43 is the new 80." Ah yes. And people are just dust in the wind, temporary as the flowers of the fields which are themselves ephemeral. We are hard-wired from and because of our childhood; he is hard-wired to grieve and run (his father was alcoholic to get away from his past as, mainly, a war orphan) - Alexie says he's not much different; I am hard-wired for conflict. If people don't worry about me, I wonder if they care. I don't blame this on my childhood (though I do see that my poor mother gets it from her poor mother...), but I do wonder if it was because I somehow got conflicting messages simultaneously: "Be happy or we won't hang out with you" and "If you're happy, you must not need any attention or companionship", which is really just the arrogance of finding one's worth in how you provide care and love for one another.
He, though not Christian (I don't think), gives excellent advice for the "spiritual searching" he sees in and from "us Euros" (white people, not money, though money is a important thing here, too): "If money changes hands, run" and "There is no shame in getting out of a situation that makes you uncomfortable." He does satire (saying exactly what you mean in a funny, sometimes darkly so, way) not irony (saying one thing to mean another), and wonders aloud why people equate seriousness with intelligence. He's deadly serious when he's 'funny', and he's funny so "he doesn't kill you." This guy is a prophet who would really rock the world and change the systems he rattles against so hard (rightfully so); I identify SO much with this guy and his voice, his thoughts - we're both 'native' poets, the only difference is that people know this about him.
I really admire this guy for that and the other reasons listed above. Mark admires him for his big head... 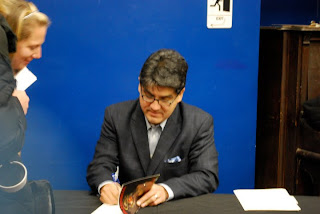 Bending in Oregon, Part 2: The scenery 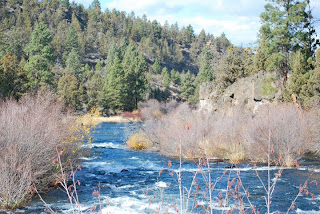 Bend is a quaint, arts-oriented, somewhat historic gathering between hills of central Oregon (the Cascades) and water (the Deschutes River). Many a hiking trail invite nature lovers, wanderers and pray-ers further into the mystery that is nature. Rocks and trees and skies and things freely appear on and as the landscape surrounding the town; dogs and explorers mingle among the seemingly untouched (save for the hiking suggestions softly snaking through) wild. 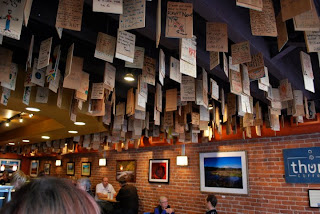 Between the awards ceremony on Wednesday, and a writer's workshop on Friday, we had one full day of "break" between; Mark and I hiked the natural beauty of Bend while our friend studied her Greek (she's in Seminary) at one of Bend's many original (I don't remember seeing a Starbucks in the entire town...) and cute coffee shops (one of whose ceiling is pictured at the right).
After that, we met for a tailgate lunch of hummus, rice, sandwiches and snacks. Then, we hung out in Dudley's - a coffee shop/bookshop before heading to a pub of some sort... 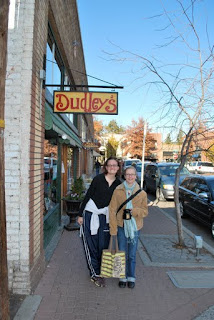 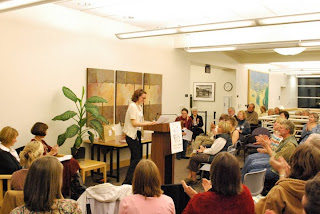 On Wednesday (the 4th), my boyfriend, good friend and I took off in good friend's truck (named Timmy) and drove about 6 and a half hours southeast to Bend, a very cute, arts-oriented town in central Oregon. I think I was a bit of a freak-show for most of the way; I won a short story contest (Short-story, nonfiction in the 19-25 age group) for a re-telling of the events surrounding my grandfather's death last Christmas. The awards ceremony included reading an excerpt from this - I'd practiced with my pastors and my boyfriend the night before and realized that cutting out things to make a 3-5 reading-out-loud excerpt really makes for good editing...
Despite how nervous I was and how difficult the material was for me (it was a true story after all), I only made one ridiculous mistake; my boyfriend tries to make me feel better about it by saying that it "builds rapport" with the audience: The title of the story I wrote is "Moving." So, after my judge announced me, I got up to the microphone to announce my story: I said, "My story is moving." After realizing what I did (the audience started to laugh), I was appropriately flustered and tried to fix it: "Oh, I mean...that's what it's CALLED. That's not an obligation or anything...". Yeah, then I read an excerpt, fairly well if I do say so myself. 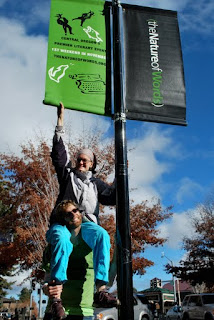 My boyfriend was up and about taking pictures the whole time, an my good friend audio-recorded the whole thing on our pastor's digital recorder. This was an incredible event - complete with 4 days of workshops and speakers (we could only stay for two because my friend and I are both [studying God] in school), one in which I am so honored to have participated - all the entries were amazing - the nature essays, the poems, the fiction short stories - and I got an anthology (including bios and pictures) of all these great pieces. I wasn't expecting this, but I got a large gift bag as well with a hand-sculpted trophy of a star (the contest I one was called "Rising Star"), postcards, a pencil, a beautiful box, a certificate, a nature-of-words tote, a pencil, a notebook, a newspaper from Bend with a write-up of the Nature of Words (it's a really big deal around these parts, there were signs all over the cute little town!), a book (whose author was at the ceremony/event) etc.
Posted by Megan at 7:13 AM 1 comment:

Nov. 4 - Nov. 6, 2009: Road trip with (ex)boyfriend and friend to The Nature of Words Awards Ceremony and Writers' workshops: winner of nonfiction short story (wrote about Pop's death) in the 19-25 age category. Pictured is a road sign on the way back from Bend to Seattle (via Salem).


Sept. 7-Sept. 18, 2009: Two week crash course in Marine Biology (Grade: A!) Picture above: my boots, and the boots of two others and the TA while out on an early tide (early morning) lab

The part of me that is a researcher just woke up...